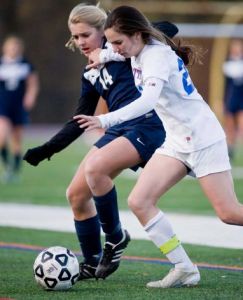 Staples Varsity Girls Soccer faced their first serious competition at their home field Friday afternoon. From the first whistle it was clear that this was going to be a hotly contested match.  Girls were faster, coverages were tighter, ball control was better than anything Staples had faced in their pre-season.  But from the opening whistle, Staples solid mid-field anchored by seniors Maggie Walsh and Chloe Rosenfield flanked by sophomores Tia Zajek and Lydia Shaw controlled the ball and kept most of the pressure on the Trumbull defense.  Early shots came from strikers senior captain Lauren Garcia and sophomore Charlotte Rossi but missed their mark as the Trumbull defense gave them little room for maneuver.  After 20 minutes Shaw received a long ball and beat two defenders to create a strong scoring chance.  She unselfishly fed the ball to Zajek running in from the other side. The strong shot went high.  The Wreckers defense was strong and even helped on the attack as junior captain outside defender Kate Lesch fed Garcia a ball that also missed high.

Toward the end of the half, possession became more 50-50 and the defense anchored by senior captain Megan Root and freshman Sally McGee in the middle were kept busy.  They worked with senior keeper Mary Bennewitz to turn away many attacks, often with a pass back to Bennewitz who cleared the ball.  Fortunes changed quickly when a loose ball in the Staples defensive end led to a mystery free-kick for Trumbull.  A well-struck centering ball bounced to the foot of their attacker and was finished into the upper right corner for a “no-doubter” 1-0 lead for Trumbull at the 32nd minute.    Staples responded with more pressure on the Trumbull goal, but couldn’t convert.

The starting 11 returned for the second half.  This time their efforts bore immediate fruits.  Tia Zajec brought the ball down the left side, beat the Trumbull defense and centered the ball.  Garcia’s shot was challenged, but deflected to Shaw who finished low right to tie the game.  Goals follow goals, and five minutes later the attack came through the center of the field as Walsh, Rosenfield, and Shaw linked up passes that gave Shaw an open shot inside the 18.  A top-right shot gave Westport a much celebrated 2-1 lead.

Trumbull countered with some energy.  Freshman Annie Amaker was kept busy with the rest of the defense using speed and tight coverage to keep the Eagles from equalizing.  The Wreckers added some much needed insurance when Garcia’s hard-work winning and possessing the ball earned a free kick deep in Trumbull’s end.  Garcia’s free kick deflected to captain Walsh who finished low and hard.  3-1 Staples and the sideline was buzzing with questions about when the last time was Staples defeated a full Trumbull squad.  Apparently, a long time.

Attrition began to set in on the cramping muscles of the hard-working Wreckers as Zajec, Garcia, and Shaw all had to be taken off the field with leg cramps.  But Staples deep bench that had lots of play in the pre-season filled in admirably.  Senior Addy Fowle helped out on both offense and defense.  Speedy sophomore Ivy Prince went to work on the wing.  Junior Brynly Marsh and sophomore Eve Korus also had some valuable minutes challenging and controlling the ball and giving the tired starters a valuable breather.  Trumbull had few serious chances to narrow the gap and the buzzer sounded to signal this first serious question of the team was answered.

Coach Beattie was satisfied with the day’s action: “I thought we dominated the game throughout but gave up a fairly easy goal. I trusted the players that we would get the result and as soon as the first went in it was only a matter of time before the rest followed. It was a solid performance all round.”

Next week is a busy week for the girls hosting McMahon, New Canaan (historically the most challenging), and Stamford at Loeffler field Monday, Wednesday and Friday.  Keep eating those bananas and drinking those water girls — should be a fun week of soccer for all.  Come on out and cheer on our Wreckers!!